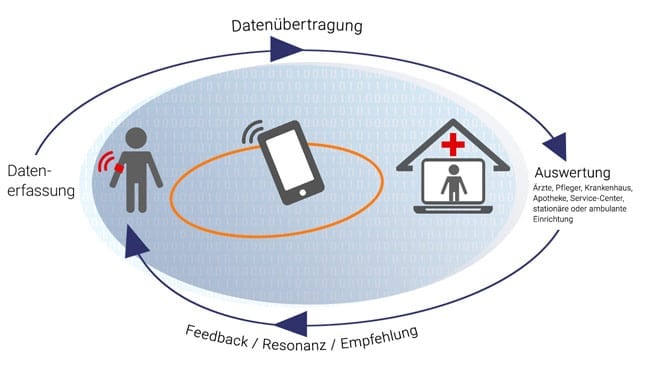 Telemedicine is a subdivision of telematics in health care and describes diagnostics and therapy by bridging a spatial or temporal distance between doctor and patient by means of telecommunications. It offers promising opportunities around the spectrum of modern forms of care and now covers almost all medical specialties. Our online course “E-Learning Telemedicine and E-Health”, which we offer in cooperation with the TÜV SÜD Academy, will familiarize you as a service provider, medical device manufacturer or technically interested with the basics and the practical application and implementation.

In our new article series, we would like to introduce you regularly to current topics in the field of telemedicine and e-health and thus kindle your enthusiasm for this topic.

Article 1: Telemedicine and its importance in Germany in 2017

“Telemedicine is the interaction between the patient and the doctor (teleconsultation) or among doctors (teleconsulting) in the context of medical diagnosis or treatment, whereby the participants are not in direct physical contact with each other. The special feature of telemedicine is that the overcoming of distance is supported by the use of technical and other means of communication. “(DIETZEL 2000)

A widespread fear is that “telemedicine replaces personal contact with doctors, nurses or pharmacists”. Rather, the opposite is the case. Telemedicine should be understood as a supportive tool. This technology helps to overcome spatial distances, analyze medical data, avoid treatment errors, and provide practitioners with the data they need to best treat patients. How this looks in practice, different applications that make it clear.

Since the entry into force of the eHealth Act in December 2015 (= “Law for Secure Digital Communications and Applications in Health Care”), there has also been a roadmap for the introduction of a digital infrastructure under the highest security standards. In the meantime telemedical services were included in the standard care for the first time. With effect from 1 April 2016, establiItd cardiologists can telemedically check whether previously determined cardiological implants, such Pacemaker, work flawlessly. This service can be billed according to the uniform valuation standard (EBM).

On April 1, 2017, the online video consultation hour was added as telemedical services, which is billed in the standard care as an EBM service. Certified video service providers thereby ensure the technical process so that doctors can remotely explain their therapy to patients via screen telephony or assess a wound. Initially, use is limited to specific physician groups and indications. An expansion is planned.

But what is the relevance of digitization and telemedicine for the German population? The “Health 4.0” survey by the Digitalverband Bitkom and the Bayerisches TelemedAllianz (BTA) deals with these and other questions. In this 1003 Germans from  the age of 14 were interviewed, including 798 Internet users and 698 smartphone users. Overall, there is a great interest of the German citizens, as Fig. 2 shows. Already 45 percent of smartphone users use health apps that record, for example, heart rate, blood pressure or previous steps. Another 45 percent can imagine using such apps in the future. 43 percent of the respondents would like to receive the results of the examination in digital form. 32 percent have the results, such as MRI findings ever get on CD. Eighteen percent of Germans have already agreed to a doctor’s appointment online and 40 percent want this online service for the future, mainly to avoid the often occurring on the phone in the daily routine in this way. Also, the SMS or mail service, reminiscent of medical appointments, is desired by almost half of all respondents, but so far only 14 percent can assert this service. If one looks at the results of the online consultation with the doctor, it is noticeable that 27 percent of the respondents would like to take advantage of this, but so far only one percent of the cases are carried out. This is the case, although doctors have recently been remunerated for the provision of this benefit. Prof. Dr. Siegfried Jedamzik, Managing Director of Bayerische TelemedAllianz, sums it up as follows: “The eHealth Act has laid an important foundation, and digitization in the healthcare sector must now finally pick up speed. Health insurance companies, doctors and clinics must move faster and face the challenges “.